The band, founded halfway 2017, has the wish to convince you that the music from bands like Rainbow and Black Sabbath with Ronnie (James) Dio and of course Ronnie's own band DIO is still absolutely unique and contains the real classics.

As you might know Ronnie (James) Dio unfortunately left us in 2010, so... with a real genuin Tribute night where we will put the “little” yet Great Man in the musical spotlights again, The Dutch Disciples wish to bring you back to the time when Ronnie James Dio enchanted us all like Rock ‘n Roll Children.
The band: 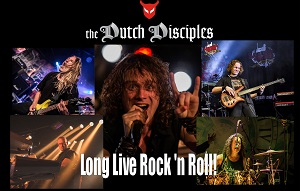